The Swedish model (or how to upgrade on a tight budget) 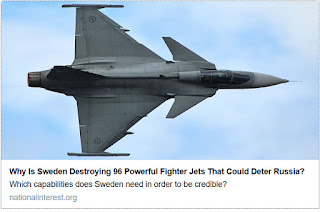 The Armed Forces budget proposal answers a gvmt order on how to increase availability on JAS 39 during the induction of JAS 39E. The answer; instead of also using parts from operative C/D fighters as a cost-saving measure in the production of JAS 39E, Sweden will only use parts from the up to 30 older JAS 39A/B that has been stored in strategic reserve. This will enable the military to fly a higher number of C/D fighters until 39E becomes operative.

Sounds like an obvious thing to do but this has always been about money. And as we say here, it's expensive to be poor. In the end, this is a better decision.

National Interest published an article by Elisabeth Braw regarding the Swedish Gripen fleet.
This was most recently up for a national debate in August but defence bloggers has raised this topic for many years. The bottom line to this story is a planned move by the Swedish military to reuse some components from its current fleet of Gripen fighters to produce the more advanced Gripen E.

Unfortunately Braw didn't receive any input from people that could properly explain the reasoning behind this process or why flying our older fighters far longer is not cost effective. Dalsjö and Widman on the other hand present some opinions in the article, unfortunately they argue as if those opinions were facts. In the Swedish defence debate Widman is perhaps not the best known politician for factually correct information and often tend to be on the sensationalist side of events.

On a side note, Widman recently claimed in a actual question to the defence minister that it would be no issue what so ever to switch between a RM12 (F404) and a F414 engine on Gripen "depending on the mission". No. Not that easy. He was arguing for GKN to receive a share of the engine support.

So I didn't plan on writing more on this subject as several of us already blogged about it in Swedish. My own entry here, also deep coverage by the skilled and aware Väpnaren and Wiseman.

However, people asked me to comment. I will at least try and write down some of the basics and you can all try to form own opinions. I assume people know about the fighters, but here's about Gripen E.

SwAF first took delivery of JAS 39A in 1993. It was a unique Swedish solution for Swedish requirements. Current version C/D is internationally adapted in line with new defence policy ambitions and export requirements. Improved electronics, NATO-adapted, air refueling, lower signatures. But same engine. JAS 39C/D will be operative in the SwAF until at least 2027.

The first major upgrade in 30 years for the SwAF fighter fleet will come with Gripen E and first operative squadron 2023. SwAF will operate C/D/E until 2027 when all of the fleet will have converted to E. There is a slim chance D will fly a little bit longer as Sweden has not ordered a twin seat F but if that happens it should be seen as mostly for supporting training of export users.

SwAF Gripen C/D fleet stands at 96 fighters.
2/3 of original production delivered from Saab 2002-2008.
1/3 delivered 2010-2015 as new airframe aircraft but components and structures from decommissioned JAS 39A. A result of the previous larger mixed fleet being reduced but upgraded to "100 C/D"

1/4th of the fleet is actually twin seat 39D and it lacks a gun, is heavier, has less fuel and as such not prefered for many missions. In Operation Unified Protector the entire deployed fleet were single-seaters.

The military concluded that costs of a C/D upgrade to make those aircraft relevant beyond 2030 and into 2040s for a regional perspective (PAK-FA, ..) were just as high as developing new Gripen E
but without benefits of a new airframe with more fuel and weapons load. 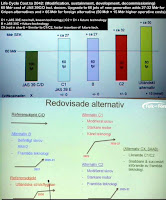 Costs to fly C/D longer include such factors as another development track, component obsolescence,
training, pilots, ground support. Money otherwise possible to spend on for instance additional Gripen E, improved E, more weapons. Or on whatever. Currently the order is for 60 JAS 39E with an air force requirement of around 80. The previous defence commission proposed another 10 but these were not included in the current defence plan. This topic will be addressed in the next defence policy decision for the period 2021+.

Contrary to information in the NI article there were no earlier plan to do a very large upgrade on C/D and keep those airframes. The plan was to build a new fighter Gripen E and reuse some components from A/B/C/D/spares. The saving are quite large when every Krona is important. The number of C/D that will donate components in the production of E  - and when - is not a fixed number, it's also a operative matter and depends on several factors.

Delivery of E will not pick up speed until about 5 years. During fleet conversion the number of actually available C/D and flight hours is not to be too low for what is seen as an operative requirement. For instance the Swedish Air Force has lower flight hour production / aircraft than Czechia. This is being addressed. What is important is how many fighters you can send up not how many you have sitting in hangars.

In a perfect world 39E would enter service before several C/D had to leave the fleet but with defence
expenditure at only 1% of GDP it's the economical choice. And as described above, the idea to keep C/D operative for much longer is even worse. Looking at the age of C/D airframes is totally irrelevant especially when the newest ones are rebuilt A's with some components from the 1990s.

In summary; not imminent but in the future Sweden is in need of a new fighter and to produce some or all of these a number of older fighters will go in and donate a few parts but they will not be chopped up. How many that will go in and when is not readily available information and subject to change. Those that do go in are not exactly "brand new" either, let's remind ourselves that the first 39C were delivered in 2002 and series production of E has not even started. In fact it has not flown.

Headlines are easy - this is a pretty advanced topic but I hope it wasn't all too confusing.